A new major International study has just been published!

A new major International study has just been published!

COO and MYC/BCL2 status do not predict outcome among patients with stage I/II DLBCL: a retrospective multicenter study

By Dr Allison Barraclough, who trained and worked in WA before recently relocating to Melbourne, and several collaborating co-authors (including four from Western Australia), which looked into gene-expression profiling and prognosis for patients with stage I/II Diffuse Large B-Cell Lymphoma (DLBCL).

The full article can be viewed here: http://www.bloodadvances.org/content/3/13/2013?sso-checked=true 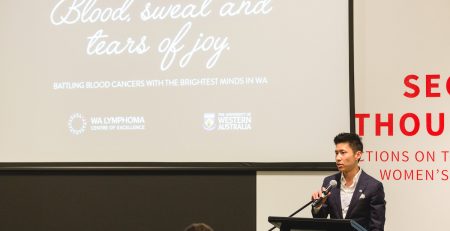 Do you or a loved one suffer from a B-Cell lymphoma which has relapsed, or is no longer responding... read more

On Friday, Blood Cancer Research WA were honoured to attend @worldsgreatestshave in Perth where (along with family & friends)... read more

In collaboration with Snowdome Foundation, Blood Cancer Research WA are delighted to welcome our newest member of the team:... read more

A new trial for Follicular Lymphoma patients is trialing a combination of three drugs, in place of chemotherapy

Blood Cancer Research WA have a vacancy We are seeking to recruit a Haematology Clinical Research Fellow to work within... read more

A Phase 2b Randomized Study to Assess the Efficacy and Safety of the Combination of Ublituximab + Umbralisib with... read more