BLOOD, SWEAT and TEARS of JOY in WA 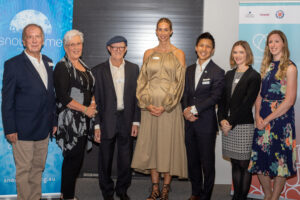 On the 12th of November 2020, Blood Cancer Research WA (BCRWA) and the Snowdome Foundation held their third annual information evening in the new EZONE building at the University of Western Australia. This evening provided the opportunity to share moments and achievements with colleagues, supporters and patients that would not have been possible without funding from our generous donors.

By 2030, blood cancer will be the leading cause of life lost from cancer in Australia. Current treatments do not cure most patients and when standard treatment do not work, the most effective treatment option is through clinical trials. In this situation the difference between having a clinical trial and not can be the difference between life and death. Prior to the establishment of BCRWA the ability to offer treatments to patients who ran out of conventional therapy options was limited. Since establishing BCRWA, Perth has become internationally recognised for contributions to blood cancer research. There has been a remarkable increase in patients treated on clinical trials and at least ten new trials opened each year.

BCRWA Founder Prof. Chan Cheah said “We can now offer a broader portfolio of trials so that patients have the opportunity to access more than one trial in case one does not work”. What this meant for in particular for one patient Rita Zuks, who was only given 3 months to live at the time of meeting Prof Cheah in 2016, was the opportunity to witness the birth of two granddaughters from being able to access 5 clinical trials in the last 4 years. This would not have been achievable without the support of generous philanthropists to fund critical positions to enrol more patients, to open more trials and to give more hope.

The most powerful stories told on the night were the profound and positive impact of participating in trials from a patient perspective. Amongst the panellists, chronic lymphocytic leukemia patient John Mahoney discussed the hope he has been offered through a clinical trial. John had exhausted all treatment options and was informed twice to prepare his farewell. “Getting on trial was between life and death” said John. Through the hard work of Dr Katharine Lewis and the trials teams, John was able to get on trial. John was previously heavily reliant on blood transfusions which prevented him from going back home to Denmark for nearly 6 months. Now after being on trial for over 5 months, he no longer requires transfusion and is well enough to travel back home after being away for an extended period – how amazing!

Not only is the BCRWA team enthusiastic about bringing trials to Western Australia, but they are also passionate about designing their own trials. Patient Cheryl Rowlands spoke favourably of the clinical trial that was offered to her at the time of being diagnosed with Follicular Lymphoma. Her haematologist went through the options available and suggested a new trial designed by Professor Cheah. This trial brings together three different non-chemotherapy treatments with fewer side effects than standard chemotherapy. She is now in complete response after six months of treatment and says she “is blessed to have experienced very minimal side effects and grateful that it opened when it did!”.

Finally, we ended the panel discussion with our new Lymphoma Clinical Nurse Consultant Helena Furdas and patient Jonathan Wolf. Helena expressed that it was a dream to be able to specialise and “provide that continuity of care to patients”, something WA was missing that the eastern states had. Her role is set to plug the gaps between what the system can provide in looking after patients and is funded by philanthropic supporters. She enjoys the one on one relationships she is able to build with patients and finds it a privilege to see that bit of anxiety lift off their shoulders by navigating them through their journey. Jonathon Wolf, who is cared by Helena, stressed how important it was to be looked after by a consistent person every step of his journey and the nature of Helena’s job allowed that.

Mark Westbrook, BCRWA committee chair concluded the night by acknowledging those who have been a part of supporting the organisation to improve outcomes for blood cancer patients and encouraged others to join in funding potential positions.

Our special thanks to the University of Western Australia for hosting us in the EZONE Building, the Susi Doherty and Kailis Brothers for their delicious catering, Jude Quinlan for his photography and Mike and Sally Calneggia of Rosabrook Wines for providing the wines for the night!